In July of 2016, as my second year was coming to its end, I ran an action research project called LIVE FEED at The Number Shop in Edinburgh. This comprised a 36-hour continuous live video feed to the locales in which the 10X residents from the summer before were presently situated at that time, and streamed live to the street on Pleasance Road in Edinburgh. Almost a year to the date of our initial kick-off to 10X, at which time the seven of us had come together in Edinburgh and caravanned to Gifford, from USA, Zurich, London, and Edinburgh, we reconvened through Skype to livestream one Place to another.

I’d built a freestanding narrow white wall, affixed my iPad to it and then pressed it up against the streetfront window from inside the Number Shop project space, facing the street. I’d set up external Bluetooth speakers on the sidewalk side of the glass so the sound could be heard for a few blocks down pleasance when the traffic wasn’t too much. I’d slotted each of the seven residents in for 2-3 hour windows of time which, as differing time zones offered, would engage each person at various times of their everyday. The only instruction from me was to 1) have and be able to hold an internet connection for the entire window of time, and 2) simply describe to us, in first person perspective, where you are and what you are doing at that time. A resident could do whatever they liked with the 2-3 hour window, but it had to relay a sense of Place. The content and processes varied greatly.

Drew Peterson streamed live from Minneapolis, USA, where he had just begun to teach a drawing class for underprivileged teenagers at Juxtaposition Arts in North Minneapolis. He’d previously told the kids what we were up to and had asked their permission before the line went live. He talked to the camera/passersby on the Pleasance about being in North Minneapolis with this group of mostly African-American teenagers during the height of the Black Lives Matter movement in America in response to the politically charged police violence against citizens of color. It was a year in which American Police had notoriously killed at least a dozen young black people –  Eric Brown, Sandra Bland, Tamir Rice, Freddie Gray, and two right there in Minneapolis: Jamar Clark and Philando Castile. It was a difficult time to be young and Black in America, and Drew’s work with these young teens remains important, and he is very good at it. It felt a privilege to bear witness to his work at this Place, and after his first 15 minutes of straight-on introduction speaking, he set his iPhone standing up to face himself as he talked to the class and also drew on his own paper. Alternately, he would hit the camera-flip button so that we could observe the kids working, unnoticed. This went on in a stealth-like fashion for at least an hour, when some of the kids, one by one, would come up to the camera and talk directly to us on Pleasance. They would ask us questions, and we asked them some questions. Though each person talking had to often repeat themselves due to trouble understanding each other’s accents, the exchanges went on for almost an hour. The experience gathered between 13-16 people in front of the Number Shop to conduct and experience the exchange. 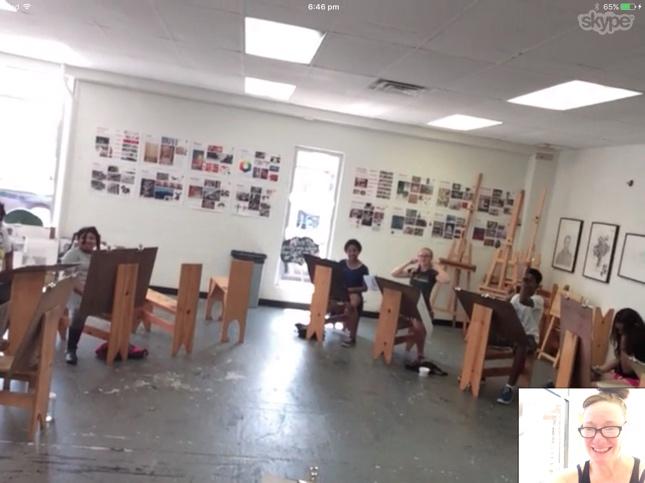 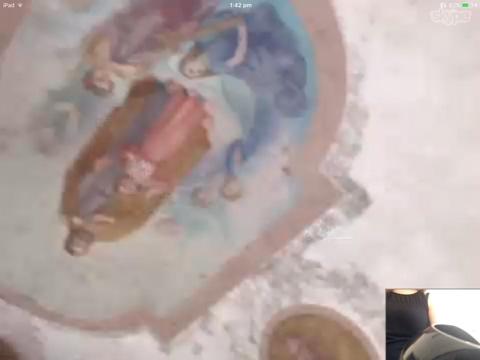 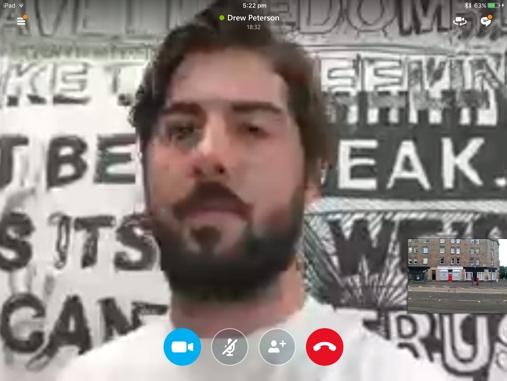 I’d earlier set up a Preference in Skype so that once my end was engaged, as one person hung up, it would automatically answer the next call that came in. After Drew had signed off, Anne-Laure Franchette called in from Southern Italy. She had just begun an artist residency there, and so was able to begin her time with us at the social hub where the internet and printers were located, and then take us on a an extensive tour of the compound, showing us the entire grounds and describing the activities that would commence in great detail. She secretly took us through an exhibition that was on at the time in the residency-affiliated gallery, which was fascinating. She moved the camera through the installation works so that we could really get a sense of them in the round. She tried to enter a cordoned off part of the exhibition, which was highly political in content and while she had viewed it previously herself was now closed off due to public controversy, and we witnessed her getting roundly re-buffed by the officials. Finally, she took us to her studio space, which was an open nook within an old barn that had been reclaimed to function as a social studio. After going round to see what the other residents were up to, with us on her hip, she settled into her nook, setting up her iPhone such that it framed her squarely. Distant ambient music emanated from someone else working in the space. She began to take up the work she was presently doing, weaving palm fronds into a quilt-like pattern. Her LIVE FEED was pleasantly situated statically thus for the remaining hour of her window of time. 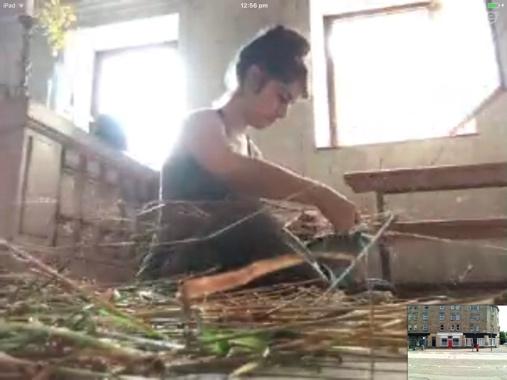 This process continued round the clock, with one feed connecting in the middle of the night Edinburgh time, coming in from USA. Andy DuCett clocked in for only an hour, after his wee daughter had gone to sleep, and so whispered in hushed tones while he led us on a tour of his house, and out to his garage studio where he was working on a large-scaled intricate wall drawing. This was all reported to me, as I, unfortunately, was sleeping at the time and so couldn’t experience it, consciously anyway.

One tweak to another iteration of this project would be to code Skype to automatically record these call experiences as well as answer them. This would solve the problem of having to have an awake and live human hitting the record button or snapping a screen shot on the answering end; in the instance of Andy DuCett, we have no record of it beyond its record in the Skype History register.

In LIVE FEED, I was exploring the compression of time and space by exploiting the possibilities of technology, mainlining the internet feed directly from one device to another, whilst bouncing off at least one satellite. How might this look and feel to the receivers on either end? Could we effectively, and affectively, convey an immediate sense of Place using this method? Most often, this did work here, though it was essentially how the participant guided the camera and conducted their time. When they allowed the camera, aka the viewer, to sit still for great lengths of time trained on one situation, a kind of suture began to occur between that Place and this Place once the mediated camera became invisible.

Further questions from the results of this experiment: Is this a way in which a virtual residency could run? How might it have worked differently if the participants hadn’t been former residents of the Gifford/Edinburgh project, last taking place at Bargain Spot in Tollcross, and did that matter at all to the passersby on Pleasance today? How would it have changed if I’d conducted the LIVE FEED experiment actually in the streetfront at Bargain Spot instead, thereby returning those players back to their same Place?

Patricia Healy McMeans is a current PhD candidate study contemporary art practice and social studios at the University of Edinburgh, Edinburgh College of Art (ECA) This web log will attempt to document her personal research under the direction of Neil Mulholland.

View all of pattymcmeans's posts.